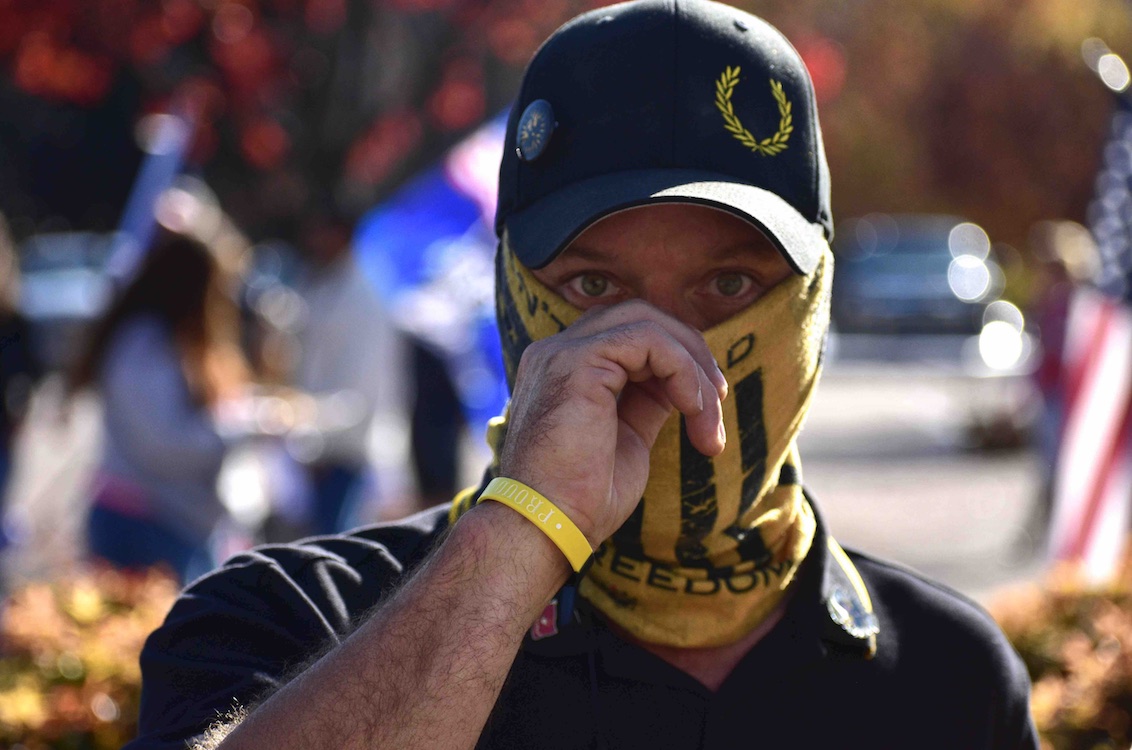 Respond to Mind Games with Mindfulness

How to Respond to the Proud Boys Chanting “Stop the Steal”

Last weekend the Proud Boys and others came to Washington DC where they got into knife fights, threatened to remove Biden one way or another, burned Black Lives Matter signs — and don’t forget mooned their message to the public — in an apparent effort to overturn the results of the election.

You would think that after Trump campaign’s 50th case was rejected in court — often times drawing ire from judges for the absurdity of their claims — people would stop contending that the election was stolen. Had there been fraud surely at least a shred of evidence would have surfaced that would have prompted some judge somewhere to flag the problem.

So why on earth are people still out in the streets chanting “stop the steal”?

Amanda Marcotte makes the argument that we do a disservice to everyone by failing to recognize what’s truly going on here: their argument is made in bad faith. These people know perfectly well that Biden won a free and fair election and it is they that want to steal it. The real issue, she argues, is racism. Trump’s supporters know it’s no longer acceptable for them to display their racism in overt ways and so they spew their venom in this slightly veiled way — not that burning black lives matter signs is a veiled form of racism, but the basic pretense of the protests is.

What on earth are we to do with a huge part of our population that is no longer willing to engage with reality?

While I don’t have all the answers for how to bring our republic back from the brink of collapse, I do have a mindfulness strategy to share for those who find themselves caught with someone engaging in manipulative behavior like this.

The Proud Boys don’t have a monopoly on acts of deception. We all encounter people who wield lies in order to take advantage of others. It may be a co-worker or boss — or even a parent or sibling. Regardless of who it is you face in your life who is playing mind games, below are four steps to help you cope with such people.

Step 1 — Ground Yourself in Reality

Engaging with highly deceptive people can twist your mind around. It’s necessary therefore, to pull back when you get wrapped up in conflict with them. They can draw you in to their twisted web where left means right and right means upside-down. The first step to dealing with such people is therefore to disengage and to come to yourself.

I use a simply mindfulness meditation to accomplish this — which has to do with setting the intention to lift my consciousness up to the highest possible state I am capable of attaining in ten breaths and then start counting, repeating the intention with each breath. After the simple practice, I always feel much more clear-headed. If I’ve been in a conflict with someone I feel back to myself.

Step 2 — Tend to Your Retaliatory Feelings

Just pulling back a bit can make a huge difference but it probably won’t resolve the intense frustration, fear, and anger — perhaps even rage — that can be prompted by encounters with someone who is attempting to warp reality to get one over on you. The second step, therefore, is to tend to your own negative feelings.

Try to stick in the same meditative state that you’ve created through the first meditation but allow yourself to have a bit of a felt experience of whatever the emotions are that you exchange has created. Let them have a moment of expression, if only within your heart and mind. Even if you think you’re above expressing such feelings, if you’ve got them in your heart it’s best to let them have a minute — otherwise they might overwhelm you later on.

After you’ve given them a moment of expression lift them up to be released and see if you can let them go.

Once you’ve tended to the negative feelings inside you, you’ve gained the edge. As long as you’re in the mode of anger or fear you’re just where the person wielding deception wants you.

Once you’ve lifted above those feelings, you’re now the one with all the power. Still, it can help to fortify that just a bit more, which is what the third step is about…

Step 3 — Fill Yourself with Dignity and Worth

Each and every human being has an immeasurable worth and dignity but few people have the felt sense of that. This leaves us seeking approval and praise from others.

Take another ten breaths and as you inhale and exhale see if you can have a felt experience of your dignity and worth. This isn’t the pride that turns people into offensive bullies on the streets — it’s just the opposite.

Now that you’re fortified you’re ready for the fourth step which is action. Taking action with others and setting your boundaries is easy to do when you don’t have anything to prove and you’re not working with an axe to grind.

There are no scripts here about what to say or do and there are laws of the universe except the truth within your heart that needs to be spoken or acted upon. Once you’ve cleared the rage and settled yourself in your inherent dignity exactly what is right in any particular moment becomes self evident.

Hopefully these principles can help you to navigate a situation with one of the most challenging kinds of people — those who have lost touch with themselves so profoundly that they believe the only way to attain the happiness they seek is through deception. Hopefully these methods can also be part of our societies greater strategy for confronting ever-Trumpers.

Want to learn about resolving negative emotions through meditation?

If you’re interested in learning more about how to resolve negative emotions through meditation, then please check out my forthcoming book, An Introduction to the Self Salutation: How to Resolve Negative Emotions Through Mindfulness Meditation. Click the link below to read a free sample.